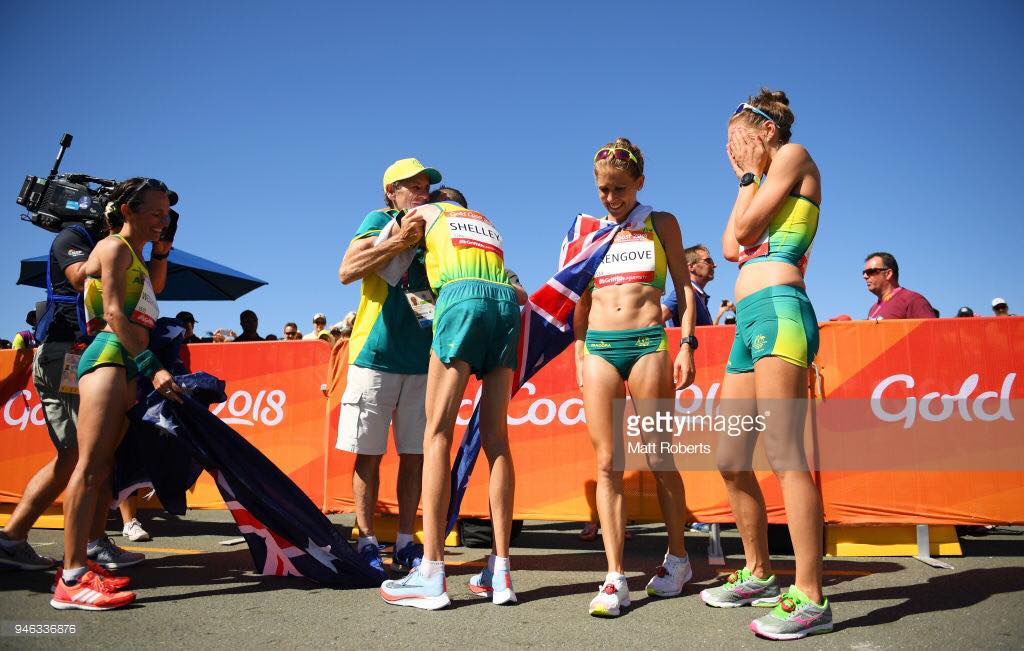 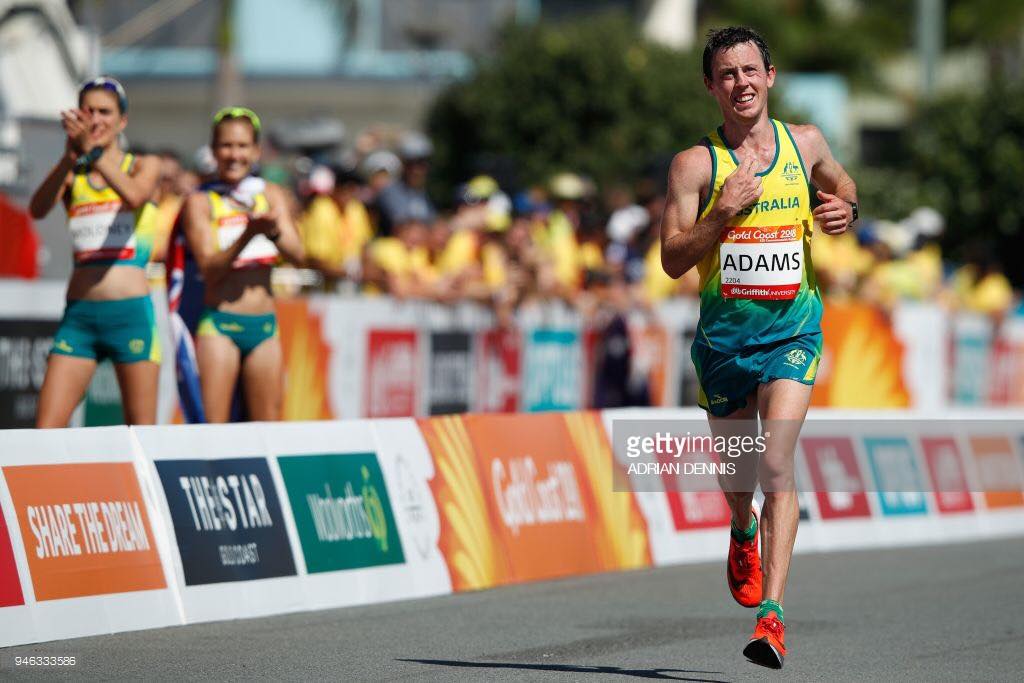 “Be like a postage stamp. Stick to something until you reach your destination.”

I carefully recorded my total mileage in the Sunday box and took a moment to reflect on the “weekly quote” before closing my Believe Journal. In exactly one week, I would be on the other side of a race that I had been aspiring towards since the day Gold Coast was announced as the 2018 Commonwealth Games host.

Until this point in time, Surfer’s Paradise had been about relaxing beach strolls, sweet fruit smoothies, invigorating waves crashing against my body, the University Games’ electric night-life, golden Meter Maids, lazy morning cappuccinos and breathtaking sunsets. With seven kilometres to go in my tenth ever Marathon and first on the Gold Coast, I found myself experiencing a somewhat different perspective. Yes – the atmosphere at Surfer’s Paradise was electric and breathtaking for reasons more than one. Remnants of the Berry fruit flavoured gel that I had consumed 5km earlier created a sweet taste in my dry mouth - not too unlike the smoothies of old. Caffeine had been consumed but without the latte art and in a far less glamorous fashion. The only waves that hit my body were those of fatigue and the golden meter maids had been replaced with the glowing silhouettes of fellow runners. An exposed morning sun added spice to my burning legs and lungs. Both ears had started to crackle as exhaustion consumed me. The ecstatic Aussie cheers that had carried me to this point became muffled and my long, laboured breaths echoed inside my head. This was the Marathon… I was the postage stamp.

They say that practice makes perfect. I don’t feel that any form of practice can totally prepare one for the final stage of a Marathon. Mastery requires a whole-hearted desire in the given moment and the choice to commit when at your most vulnerable. Don’t get me wrong, physical and mental training, an appropriate taper, footwear, nutrition and hydration strategies are crucial but when you are stripped to your core and the inevitable hurt kicks in, none of this matters unless one is prepared to fight. It boils down to how badly you want it.

I had the fortune of spending a week in the Games Village with five Australian female athletes in the lead up to my race (on the final day of competition). To say they were inspiring would be an understatement. My roommate alone had achieved a 1500m personal best, a final’s berth and a world-class 800m run in the space of a few days. Our apartment TV was fixed on channel seven and our gatherings on the coloured bean bags to watch Team Australia in action created memories that I will treasure forever. Brandon Starc’s raw emotion as he bounded off the high jump mat after victory to hug his loved ones in the crowd, Kurtis Marschall’s poise in such a high pressure situation, the persistence and humility of Kathryn Mitchell that led to one of happiest golden moments, the determination and focus of Linden Hall in a classy women’s 1500m final, the fight of Celia Sullohern and Amy Cure’s sprint home to collect her second gold medal in the Anna Meares velodrome – just to name a few. Fighting spirits, national pride and grit powered the green and gold athletes in front of excitable home crowds. Adrenaline ran through my veins time and time again. I made mental notes that I planned to draw upon during my own looming battle between body and mind.

Yachts rested peacefully in the nearby waters. As I rounded a long bend, Sundale bridge came into view, telling me that we were well and truly at the business end. I noted the distance between myself and this familiar landmark, which preceded a steady incline. It was bound to pinch. The heels of team mate Lisa Weightman bobbed up and down on the wide road before me and those of Johannes from Namibia were doing the same somewhere further ahead. I had covered this exact ground with ease only 24 hours ago, on a relaxed pre-race jog with coach Adam Didyk. How quickly feelings can change.

After a short period of tuning out to escape my body’s physical signs, I brought my awareness back to the race. I was on the final hill and told myself that it would be easier on the other side. Adam had talked to me about this climb during our jog together. The simple postural cues that he had provided teased my limbs as they desperately tried to respond. I was aware of familiar voices to my right as I hugged the fence to draw on the crowd’s energy and the soothing shade. If I had been an antelope with a Lion chasing me, I honestly don’t know if I could have run any faster. This was “survival mode” (as Liam Adams described his experience in the men’s Marathon). The downhill run was not providing the dose of pain relief that I hoped it would. What did offer a momentary positive distraction however was the excited face of my long term friend Alice Monfries in the crowd, followed closely by loud and lovable cheers from my brother Jack and his girlfriend Sarah. Despite my partially blocked hearing, I was well aware of the booming cheers. By now I was hanging out for my team mate Lisa to make a right turn in the distance as that would give me a home-straight landmark on which to focus.

“One foot in front of the other” I chanted - so easy one day, so hard the next. Finally, it was time to make that highly-anticipated turn towards the final straight. My body and brain felt like sponges, desperately trying to soak up and enjoy every second but too wet to absorb much more. Crossing the line was bliss. I smiled with relief. Delayed reflexes caught me as I fell to the left. My eyes were crossed and moving my body in a forward direction required more concentration than I had the energy to give. Two women swept their arms under my own and provided much appreciated support. A bottle of water was handed to me and a wet towel placed behind my neck. I was excited to spend a moment with my coach who had shared every part of the ride to this moment since 2008. Lisa, Gin Moloney and I exchanged a hug before collapsing into our chairs. Anyone would have thought we had completed an ocean swim with the amount of salt and water flicking off our bodies. Two fingers were placed on my wrist for a heart rate check as waves of nausea slapped my guts.

There was evident concern and an uncomfortable silence as the big screen nearby exposed the impact of this heat on the Marathoners out on course. It was hard to watch. Elation filled the air as Australian Michael Shelley came into view on the home straight. I was grateful to be there for the special moment when he broke the tape, as I had been in the final stages of my own race when this occurred in Glasgow four years earlier. Gin and I tested our voice boxes as Liam Adams powered towards the finish line, wearing nothing but grind on his face. “Tough as nails” I thought to myself, then grimaced as a piercing pain shot up from two freshly-broken toe nails. Clearly this analogy needed reevaluation – nails (of the toe variety at least) had nothing on the strength of these guys.

If I were to sum up the emotions of the final seven kilometers with seven words I would choose heart, belief, desire, strength, commitment, will and skill. Training and preparation create the appropriately equipped vehicle but it is a combination of these crucial values which power the drive. It’s not always a pretty journey which makes reaching the destination all the more satisfying. Would I do it all again?